“An Ambassador’s Incredible Reminiscences” is my Uncles’s Memoir: set in the historic time of the coming of the missionaries in Nigeria, Africa. My Uncle O. U. Ikpa was part of the process of the coming of the missionaries. The incidents described are rooted in the Jbo culture of Eastern part of Nigeria then, just like Chinua Achebe’s book: “Thing Fall Apart,” used in American schools.

The specific time of these incidents was during the Biafria / Nigerian War, when my Uncle O.U. Ikpa served as a representative in Lisbon, Portugal. He served as Nigeria’s Ambassador to other countries before the war. He was a brilliant scholar and statesman; highly honored and respected by all. He was also kind and famous. He experienced incredible trials and great obstacles, and again and again, he miraculously overcame them. His faith in God sustained him, and hope that good will triumph over evil gave him the courage to carry on to victory after victory.

The world should really know and read such powerful stories of human triumph, so they can be encouraged to know that there is nothing impossible with God when humans are stock in the docks. My Uncle had a lot of faith in God and massive courage for human survival. His experience transcends racial line in that human suffering does not recognise color. Many people will love this book. It was only divine providence that could have kept my Uncle a life until his death in 2006 at the age of 77. This is a story of extraordinary circumstances, met with extraordinary courage amidst great devastation. It will encourage many. 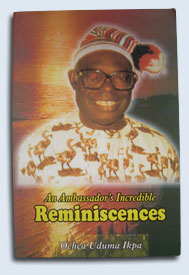